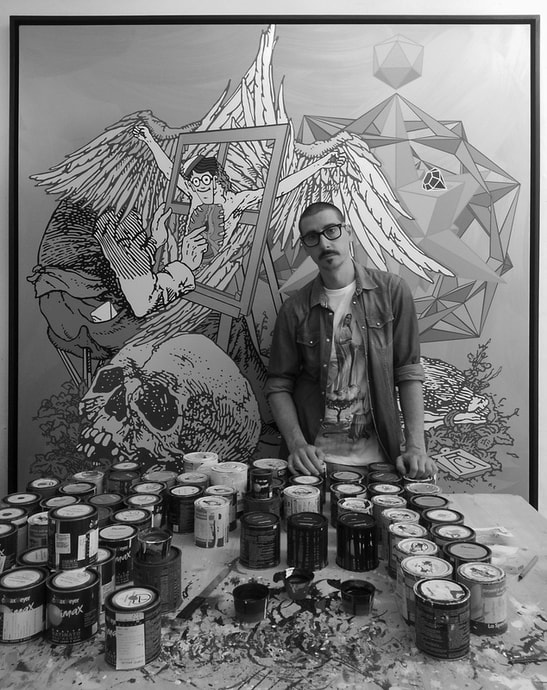 Gabriele Arruzzo was born in Rome in 1976.
Until 1980 his family lived in the Capital, then they settled permanently in Pesaro, his mother's hometown.
Due to frequent respiratory problems, he attended elementary school sporadically, spending lots of time at home looking through art books and learning to read from the comic books in his father's collection. Since then, and until the last year of middle school, he drew obsessively, till he made a conscious decision to stop.
In 1991 he enrolled in science high school, but his achievement was low.
In 1993 he began doing graffiti, partially because of the fact that Pesaro, in the 1990s, was one of the most vibrant centers of Italian street art.
In 1995 he dropped out of high school and began his studies in the Advertising Graphics department of the State Art Institute of Urbino, better known as the “Book School” because of its long tradition of artistic bookbinding. He graduates in 1998.
That same year he enrolled at the Fine Arts Academy of Urbino, in the Painting department.
In 2001 he stopped doing graffiti to devote his time fully to painting.
Two years later he took a degree, with a thesis that analyzed the fundamental role of asthma in the artistic production of Francis Bacon (1909-1992).
From 2004 on he began to have regular shows in private galleries and public spaces in Italy and abroad.
In 2006 he took an advanced degree in the two-year program of specialization in Painting, at the Fine arts Academy of Urbino, where he has been teaching since 2008. Lives and works in Pesaro, Italy.
Gabriele Arruzzo,art, painting,show,paint,painter,website,exhibition